There is a lot to see when looking up at the night sky. From the stars to the moon to an eternity of empty space. On June 5th and June 6th there will be a once in a lifetime phenomena to look for.  The transit of Venus. So mark your calendars and download the Astronomers without Borders app because the next one will be in 2117.

Mercury and Venus are closer to the sun than Earth. And so, there orbits around the sun are smaller. Even though they pass through our orbit often, the planets are usually above or below the sun as we see it. However, once in a while the 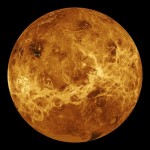 planets line up just right and we, from way down and far off below, can see the round black silhouette of the planet crossing the sun. The transit of Mercury usually occurs 13 times every century. While Venus goes through two transits every 100 years.

You may be asking, so what? A black dot across the sun what’s all the hub-bub about. Well, historically these transits, this rare alignment, is how researchers measured the size of our solar system. And now, it is your turn to get huge bragging rights saying you helped  measure the size of the Universe. Download the free app from Astronomers Without Borders for the iPhone or Android phones. Record the timing of this event in your hometown and be a citizen scientist.

Information from Scientific American and Astronomers without Borders.